During arousal, penile arteries dilate (open-up) following smooth muscle relaxation of the cavernosal sinuses, then the penis inner erectile tissue fills with blood and expands as pressure rises inside the corpora cavernosa. In order to sustain penile pressure and rigidity, draining veins are compressed during penile expansion preventing blood from rapidly leaving the penis.

The thickness-elasticity (stiffness) relationship between the deep “Buck’s” fascia and tunica albuginea play an important physiological role with penile veno-occlusions. Weak venous occlusion is associated with a reduced amount of elastic fibers and their arrangement or structural alterations to the fibroelastic properties of the tunica albuginea, deep fascia and corpora cavernosa.

“Scanning Electron Microscopy of the Tunica Albuginea of the Corpora Cavernosa in Normal and Impotent Subjects.”

The Loverband® device recovers up to 60 percent deficiency of the out-of-tunica closure mechanism by the controlled application of pressure at the penis dorsal base without adversely affecting blood circulation of the penis.

Deficiencies in the erectile occlusion system, at the present time, can only be treated by deep dorsal vein surgery with limited effectiveness. Storing more blood inside the penis under high pressure and allowing it to circulate largely improves oxygenation to the penile tissue and erection performance. 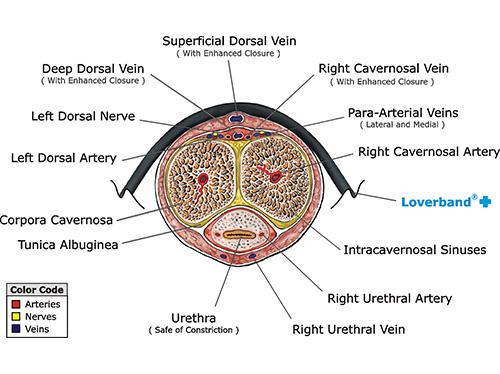 Cross-section of the penis with The Loverband® Device

The cavernosal arteries are the major arterial supply to the corpora cavernosa and are subjected to changing intracorporeal pressure.

The erection-related veins are arranged on the dorsal portion of the tunica albuginea and receive blood return from the out-of-tunica emissary and lateral circumflex veins along the penis.

Consult with your physician before using this device in combination with erection medications or if you have symptoms of erectile dysfunction or any existing medical condition of the penis.

Check out these sections to learn more about these conditions: